The meeting was an afternoon / evening meeting and was the first round of the season for IPRAWA.
We had 16 cars front for the meeting which was very encouraging, as we know of at least five and possibly six more all but ready to go.

Dion Panizza qualified fastest with a 65.46

QUALIFYING
Fifteen cars went out to qualify after Ducky remembered that he had left his logbooks at home and was prevented from posting a time.  Mark Jewell was an early retirement with oil pressure problems and his day was done before it even started.
Dion Panizza was fastest in qualifying and Jamie McKinnell was also very fast in the Integra.... now sporting a new motor, and pushed Panizza all the way to finish with a time of 65.8, a very creditable time when giving away 4 litres.
Grant Gellan was also fast in the Mk1 Escort and was third quickest with a 66.3.
Five V8's mainly struggling with grip, followed, then the two Under 3 Litre cars followed by the babies.
Mark Ellis was experiencing issues again and only completed two laps.
Frank Panizza saw red on the first lap...when his bonnet came up, smashing his windscreen and causing a lot of aesthetic damage 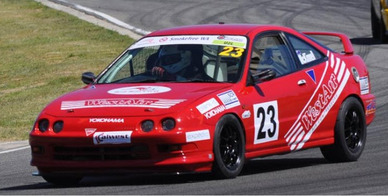 Jamie McKinnell pushed Dion Panizza all the way, to go down by 0.2 seconds

RACE 1
Jamie McKinnell's Integra was a standout in this first race of the season and went down by the narrowest of margins to Dion Panizza who took the flag.
Jason Wilson, Grant Gellan and John Callegari were the chasers until Callegari pulled out at the start of lap 7 with an overheating and brake issue.  That left Wilson and Gellan to continue their engagement for the whole race with Wilson finally staying ahead by 0.8 seconds from the smaller car which was very well driven by Gellan. Wayne Chrystal, last season's O2L champion and Mr. Consistent, finished 3rd in his Class.
Jason Sinclair and Jai Philp, in the Under 3L class, raced together and followed the other V8's across the line with Sinclair, in the beautifully presented BMW M3, crossing first, nearly nine seconds clear.
Geoff Duckworth led the Under 1.6L cars home from newcomer Simon Morrison who beat last years champion Tim Riley by0.6 seconds for the seconds spot.  Sean Ferrall found himself "tail end charlie" but was enjoying himself in the little Mirage...well as much as you would.
Mark Ellis was again haunted by gremlins and joined Callegari on the DNF list, this time with a broken fuel pump wire which "over amped" and blew his circuit breaker, but both cars would return for race 2.

RACE 2
This was a funny sort of race.  It started badly for Jason Sinclair in his immaculate BMW, when he had contact with the Just Commodores car of Terry Mason off the line.
Mason then had a spectacular fire show coming down the hill when oil from a ruptured dip stick tube ignited and engulfed the bottom of the car and engine bay in flames, which luckily extinguished itself but forced him out...but not before a bit of oil fell in the braking zone to turn 7.
Frank Panizza and Wayne Chystal, who was close behind, both found the oil and parked up in the runoff sand at turn 7.  Dion limped off the track on the same lap with electrical issues, allowing Callegari, who started rear of grid, to chase the front runners.
Mark Ellis and Jason Wilson were battling it out at the front and, as hard as he tried, Wilson could not get past Ellis who went on to record a win..the first for a long time.
Jamie McKinnell and Grant Gellan had a close race again, but the red Integra was too strong and finished 2.5 seconds ahead of Gellan.  Callegari failed to catch them both by a further 2 seconds, but the car was settling down despite ongoing brake issues.
Tim Riley turned the tables on the U1.6L cars with a convincing win over Simon Morrison by a margin of 6 seconds.  Geoff Duckworth was experiencing fuel issues in the little Civic and limped around 9 seconds behind Sean Ferrall who managed a third, a lap behind Morrison and Riley.
The BMW of Jason Sinclair again led the Jai Philp car home in the Under 3L class by 3 seconds, a lot closer margin than race 1.
We were short changed in this race, which was supposed to be a 12 lap reverse grid, but the flag came out after 10. It would have been interesting as there were several challenges being mounted at the time which could have affected the outcome.

RACE 3
This was the first time for a final race 6 lap sprint.
Despite the issues throughout the night, 14 cars fronted for the last race, probably the best final race field for some time.
With Geoff Duckworth's car now running somewhere near normal, he was again able to dominate the Under 1.6l field with Simon Morrison again nudging out Tim Riley for second by around 0.5 seconds        ( Race 1 was 0.6seconds and Race 3 was 0.4 seconds.) This indicates a very good, even racing season for these two members.
Jason Sinclair trounced his Under 3L rival Jai Philp in this race by some 10 seconds, making it a very good first race meeting for him.
Jamie McKinnell again proved the master of the Under 2Lclass, albeit despite very tight racing between him and Grant Gellan and this also indicates a good, close season for these two. McKinnell finished the 6 lap sprint 1.6 seconds ahead.
Tight racing was also a feature in the Over 2 litre class with Dion Panizza and Jason Wilson having a great battle for supremacy.  John Callegari, who again started at the rear of grid, ran out of time in the 6 lap format to catch the leaders and ended up 2.9 seconds off a podium.
In a great finish to the last race of the night, the blue Commodore of Dion Panizza took the honours by 0.9 seconds from Wilson, with Callegari 3rd.

Honours for the WASCC championship points went to Jason Wilson in Over 2L, from Dion Panizza and Jason Sinclair.  Under 2L went to Jamie McKinnell from Grant Gellan, and Under 1.6L went to Geoff Duckworth on a countback from Simon Morrison, with Tim Riley 3rd.

IPRAWA championship points went to Wilson, Dion Panizza, with John Callegari 3rd, with the other classes remaining the same.