The race meeting on Saturday, 6th July, was held on the first day of the Perth Historic Race Meeting, with WASCC deciding to complete the entire IP and Street Car meeting on the one day, which was a great move on their behalf.
The meeting saw the first appearance of the Matt Cherry driven Starlet in a competition and the little machine was fast.

Matt admitted that he is still coming to grips with the different driving style necessary for this vehicle as against the Monaro but all indications is that it will get faster and faster, already doing creditable 63s.

Sadly a mechanical issue forced her to retire in race 1


The Starlet stretching her legs in qualifying 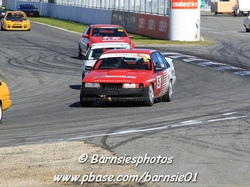 John Callegari, with a new look front end, on his way to 1st Over 2 litre.

Matt Cherry snapped a shock absorber mount on the Starlet, which in turn tore out a rear brake line, causing him some anxious moments before having to retire from the race on lap 6 of 8.
On his 6th lap, Frank Panizza remembered he hadn't refuelled since Darwin and ran out of fuel when he was travelling well.
Dion was up near the lead, also showing a lot of pace but was excluded from the meeting when the cars were measured for height at the end of the race, and he failed.
Mark Ellis continued his run of outs when he blew his gearbox and was forced out, ending his day.
That left the Over 2 litre points leader Wayne Chrystal to do battle with John Callegari and Glyn Crimp, with Callegari, sporting a new look bumper, taking the points from Chrystal and Crimp.
Under 2 litre saw Gavin Reynolds far too good  and was in fact the first IP car to finish. Geoff Duckworth finished 13 seconds behind Reynolds with Jamie McKinnell third.
Tim Riley took the Under 1600 win by 17/100th of a second from Don Simpson with Monica Jakovich a creditable 20 seconds behind. Brad Wheeler, enjoying himself immensely, finished a further 30 seconds behind in his little Charade. 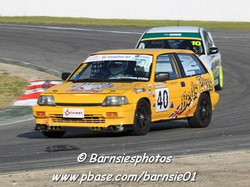 Gavin Reynolds snapped an alternator bolt during race 1 and was unable to get it fixed in time and failed to make the start, effectively ruining his meeting.
Mark Ellis had gone home, Matt Cherry had packed up, Glyn Crim had sprung a leak somewhere and pulled out and Frank Panizza put some fuel in his car...all was good for Frank.
In the Under 1600 class, Don Simpson had a real good tussle with Tim Riley and it was great to see Simpson prevail over the consistent Riley by a second and a half, with Monica Jakovich again 3rd and Brad Wheeler again 4th.
Jamie McKinnell was racing really well until his power wire fell off the back of his ignition switch, causing him to park on the start/finish line, bringing out the safety car.
Yellow flashing lights and flags didn't mean much to a heap of driver's who obviously couldn't work out why everyone else was slowing down and a lot of cars suffered position losses as a result of obeying the rules of racing.  No-one seemed to care, including the officials and when McKinnell's car was removed the race continued.
Geoff Duckworth was the only surviving Under 2 litre and coasted to a win for the class.
Wayne Chrystal, courtesy of a very good start and movement through the reverse grid field of slower vehicles had established a good break over John Callegari and Frank Panizza, who were both badly held up, but were chasing hard. Chrystal was good enough to hold on for a good win from Callegari and Panizza, in that order.
Dion Panizza pulled out on lap 7 with a snapped serpentine belt 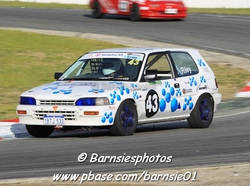 Gavin Reynolds managed to fix his alternator and get to the grid, but Dion Panizza, snapped a rocker cover bolt while repairing a gasket oil leak and couldn't get the bolt out, topping off a very sad day for him and his nicely presented car.
Monica Jakovich broke into the 72 seconds with a best lap of 72.91 to continue her vast improvement.
Jamie McKinnell put his wire back on and made it out, giving Geoff Duckworth a bit of competition.
Two cars fought out the Under 2 litre class however, when Reynolds pulled out on the second last lap with an engine misfire to prevent any serious damage.
McKinnell drove a great race, spurred on by his DNF and took out the class by 7 seconds from Duckworth.
In the Under 1600, whoever crossed the line first between Tim Riley and Don Simpson, took out the meeting.
Simpson chased hard but Riley was too good coming in first again by 5 seconds, taking out the meeting.
Jakovich again finished 3rd, with Wheeler again bringing up the rear...but having a good time.
Wayne Chrystal had to beat John Callegari  over the line to take out the meeting for Over 2 litre, but Callegari, with a firmer brake pedal at last and a better start got in front of Chrystal by turn 1 and continued to pull away to take the honours by 7 seconds. Frank Panizza, with plenty of fuel, ran another 3rd.