The July meeting got under way on a cold morning but no threat of rain was evident.  Despite the two late withdrawals of Grant Gellan and Jamie McKinnell with mechanical issues a good field of 20 prepared to race.  Work and other commitments prevented at least another six cars from competing.
The addition of the WA Hyundai Excel Championship Racing series starters bolstered the grid with six beautifully presented cars turning up for their introduction to circuit racing in "closed cars," with the drivers coming from go karts, at which they showed themselves to be extremely talented.


QUALIFYING
Dion Panizza continued from where he left off last meeting by setting the fastest time with a 64.87 second lap.  Mark Ellis was back from dropping his tailshaft and the car was showing good speed, bringing him in for second fastest with a 65.43 seconds, with mark Jewell in the beautifully presented Torana SS thrird with a 65.63 second lap.

There were no Under 2 litre cars for the meeting and Geoff Duckworth led the Under 1600cc class with a time of 70.97 seconds, to get the gong from Simon Morrison by 4/1000th of a second, with Tim Riley 0.22 seconds further back.  This is typical of these three cars and they are extremely close in performance with it being luck on the day which dictates their finishing order.

The Hyundais, out for their first session in the new form of racing for them impressed with their skills, and they presented and drove like old hands.  Nick Mitic was quickest with a time of 77.33, from Alex Rullo with a time of 77.71, with Thomas Schoua a further 0.4 seconds adrift. 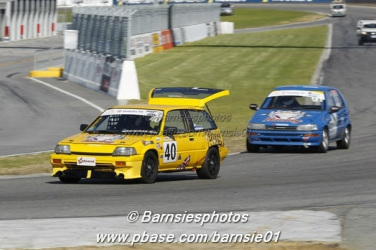 RACE 1
Sadly we were short changed one lap when the crew in the start/finish box held out the chequered flag instead of the last lap board..but that's racing as they say.

The anticipated stoush between the three main contenders in Under 1600cc took a strange turn when Geoff Duckworth started lapping with the biggest wing ever presented on a Honda Civic, that is, his hatch back came open on lap 1 and he received a mechanical black flag and returned to pit lane to close it, but the other two had bolted, so Duckworth spent the rest of the race catching and mixing with the Hyundais.  Simon Morrison and Tim Riley continued their close racing, again, and eventually the little Corolla KE10 of Morrison held on to take the class flag from Riley by 0.23 seconds, with Duckworth well back but still beating home Brad Wheeler by 9 seconds.

Rueben Romkes, with his new paint job and impressive front bumper, tore it off and scratched the paint when he went straight on at Turn 6 (Kon's) and clipped the wall on the other side of the sand.  He pulled out, not sure of the extent of damage.  Mike Miller snapped his timing chain and was out, hopefully with not too much internal damage, but these things have a habit of manifesting themselves once the engine is stripped down, but hopefully he will be back for thr Tander Trophy.
Dion Panizza had an untidy episode at turn 1 into the race and this allowed Jason Wilson, back at Barbagallo, to get though and hold off Mark Ellis and a fast finishing Dion Panizza to take the flag. Ellis was the smallest of margins behind Wilson, 0.05 seconds, with Panizza closing to within1.5 seconds of Ellis despite his "off."

The Hyundais continued their tight tussle down the back, again keeping the little blue Diahatsu Charade of Brad Wheeler company. At their first race start, Alex Rullo took the flag from Nick Mitic by 1.1 seconds, with Cameron Nash third, a further 1.5 seconds behind.  This was a good effort by Nash and his crew who managed to sort an engine issue after qualifying as the other cars were heading to the dummy grid.


Wayne Chrystal dropped from 5th to 8th overall after incurring a 60 second penalty for a race infringement and Frank Panizza from 4th to 7th for the same penalty.

Start of Race 2, a reverse grid, shows Wayne Chrystal about to hit the front at turn 1


Race 2
With Mike Miller out, the field was reduced to 19 cars for the reverse grid race and once again it saw Dion Panizza take up the running in the O2L cars. Mark Ellis had an issue on lap 7 and pulled out, and that saw Wayne Chrystal chase Panizza after Wilson had engine mis-fire issues.  Frank Panizza also showed a bit of form and moved into third position and managed to stay there by 3 seconds over Mark Jewell. Dion Panizza eventually cleared out by over 4 seconds from Chrystal with Frank Panizza a further 0.6 seconds away.

The Under 1600cc group were seperated by what was the biggest margins for the season so far, probably due to the reverse grid creating some delays at critical times.  Simon Morrison, driving very well, lead the way throughout and went to the line first in the class from Geoff Duckworth, then Tim Riley.  The margins this time were 2.5 seconds and 7.8 seconds respectively.

Down the back the Hyundais were engaged in good racing again, with Cameron Nash triumphant by 0.7 seconds over Alex Rullo, with Nick Mitic rounding out the podium and 12 seconds off the pace


Race 3
Simon Morrison, Tim Riley and Geoff Duckworth were hard at it again in the Under 1600cc class with the lead changing numerous times in the six lap sprint to finish off the day.
Duckworth had the lead going into turn 7 for the last time but a better exit by Morrison saw him get past in the run to the line, and a late charge by Riley took him alongside Duckworth but just failed to get ahead.  The total margin between these three was 0.36 seconds, with Morrison to Duckworth 0.09 nd Duckworth to Riley 0.27 seconds.  Well raced guys.

Dion Panizza dominated the pack in the bigger cars and chalked up his second win for the meeting by a convincing 7 seconds over Jason Wilson, who was a further 4 seconds ahead of Wayne Chrystal.
Mark Ellis got going again but could only manage 4th, a further 1.3 seconds off.

Alex Rullo topped off his start to his circuit racing career with another win in this race, beating Cameron Nash across the line again with Nick Mitic again finishing 3rd.  Rullo got the flag in the class by 2.7 seconds, with Mitic and the others getting lapped just as Panizza got the chequered flag and fell a lap down. The other three Hyundai drivers, Thomas Schou, Dom Coniglio and Jake Kostecki all drove very well and were just a little off the pace but, by the looks of their grins, still had a wow of a time.  Well done for a first up racing effort guys and it's a pleasure to have you aboard.