The Bend is really best described as awesome.  That description applies to the Hotel, Race Reception area, Restaurant, and wow – what a track.  I have never struggled so much to learn the basics, never mind the subtleties of a track.
This is the story seen through the eyes of one of eight IPRAWA  competitors.
Meanwhile, the trucks and trailers were arriving.  Glen Melling bought 3 cars over in the impressive Jasmat Steel rig.​ 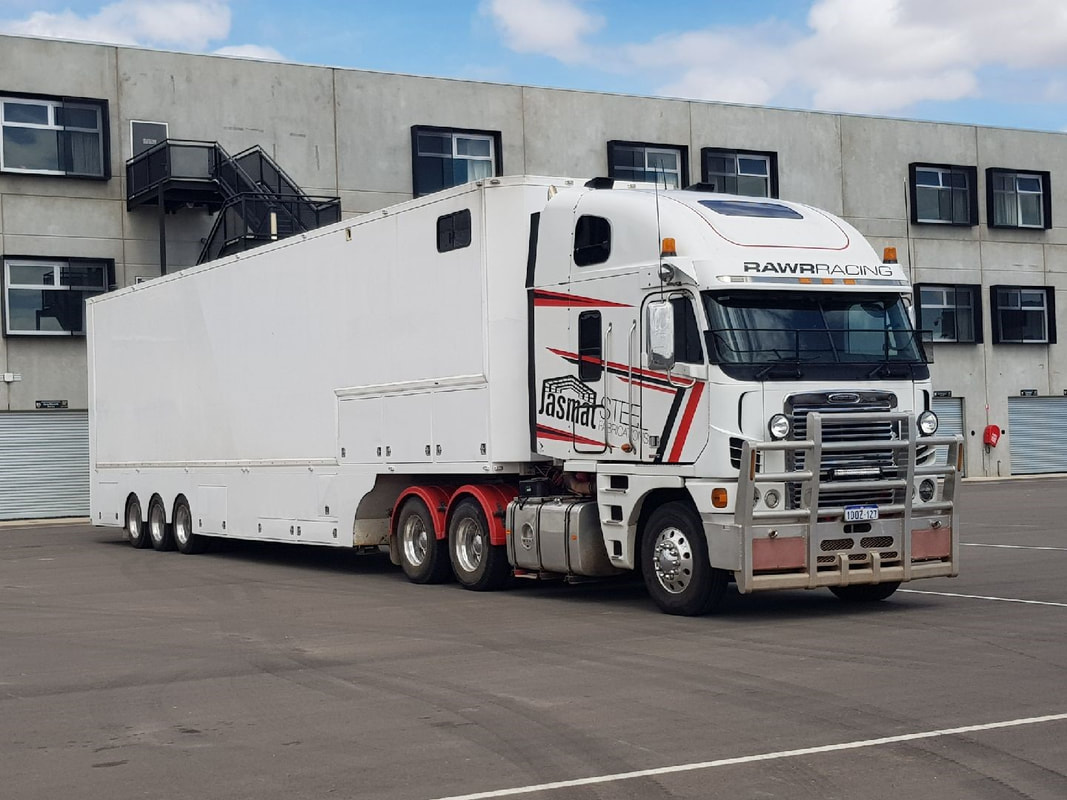 Eight competitors from WA made the journey.
The  4.95Km “International” Circuit which has 18 corners. ​ 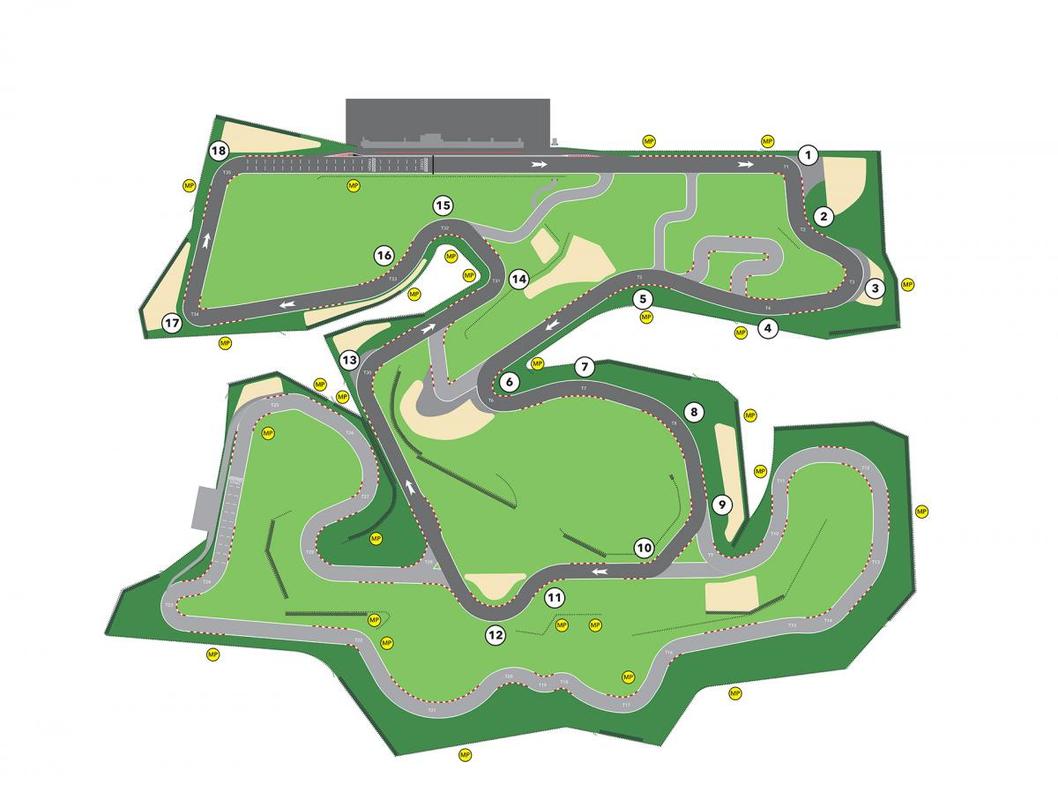 Whoever designed this circuit did a GR8 job.  Track characteristics are:
Enough of that, what about the racing you ask?  The field was huge, with about 100 cars competing in the various IPRA sub-classes…..

Whilst our fortunes were a bit mixed, our overall performance in the Heats & Finals secured WA a victory in the State of Origin competition.  Go WA! 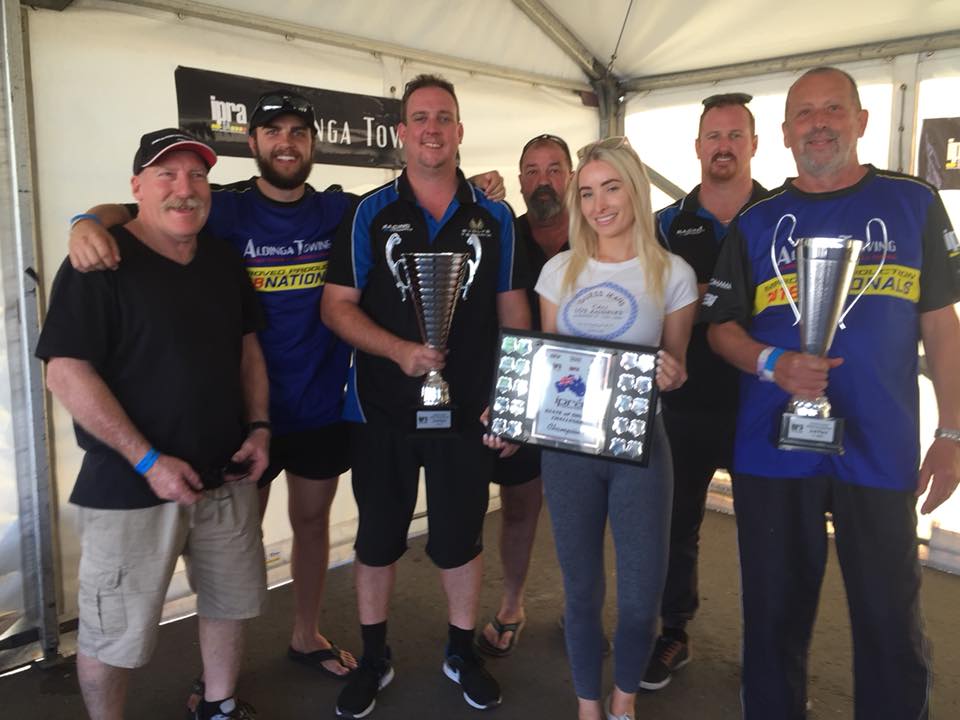 The grit and determination of the WA competitors is perhaps best displayed by Brooke Newson’s West Coast Smash Repairs team. 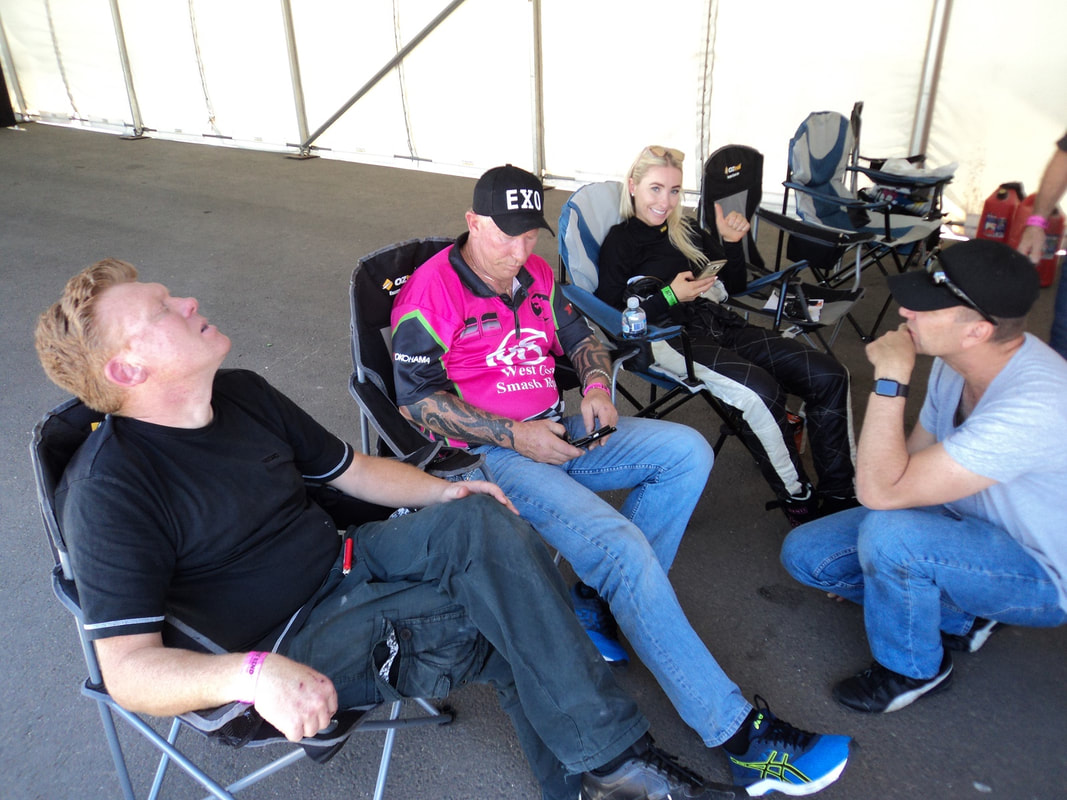 Her WRX suffered an early engine failure.  A replacement engine was found and fitted, but then it too then failed.  Game over.

The camaraderie in IPRA was best illustrated after Ron Coote (WA) suffered a gearbox failure.  A newly balanced tail-shaft on his Escort failed in Q1.  It broke the gearbox in half and did extensive damage to the bell housing and broke an engine mount..  A local competitor loaned Ron a brand new dogbox.  That got Ron back out in time for Heat 1.  Here’s the remarkable part of the story:  The gearbox owner told Ron not to worry about removing it after the event, just to freight it back from WA where it could more conveniently extracted.
​UNDER 2 LITRE FINAL

I cannot really say much about Under 2L, as I was competing in it.  The Final was won by David Waldon (QLD) in a Mazda RX3.  Fastest lap was a 2:09 which would have equated to about P10 in Over 3L.  Awesome quick.  WA was under-represented here with only Ron Coote (Escort) and Tim Riley (U1,600 Corolla) coming home in 19th and 20th places respectively.

Timbo, in the U1600 Corolla had a problem.  Fuel tank too small.  The new Pace Motorsport engine was first used a fortnight earlier, and just drank fuel.  30% more power is GR8 until you have to race 60 Km.  Err maybe 30% more fuel consumption?  The answer was to run the four heats on two tanks of fuel to assess the likely problem for 12 Laps (60 Km) racing.  Riley went off hot mixing it with 2L Peugeots and Renaults, before having to go into “fuel saving mode”.  Notwithstanding that, Riley was quick enough to get his hands on the silverware for 2nd Place U1,600. 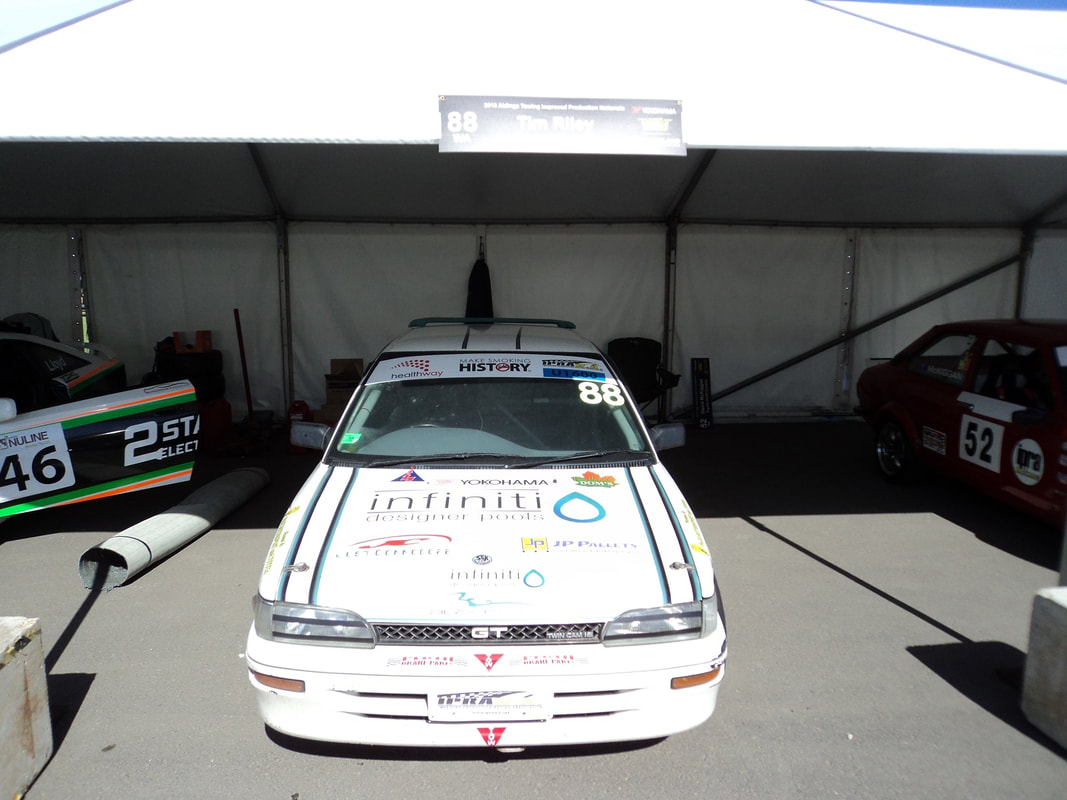 Glen Melling (WA) in the Jasmat Steel Commodore had gremlins all weekend.  The dramas were overcome, but lack of points sent him to the Repechage, which he led early on, but later suffered a tyre delamination.  A very sad tale. 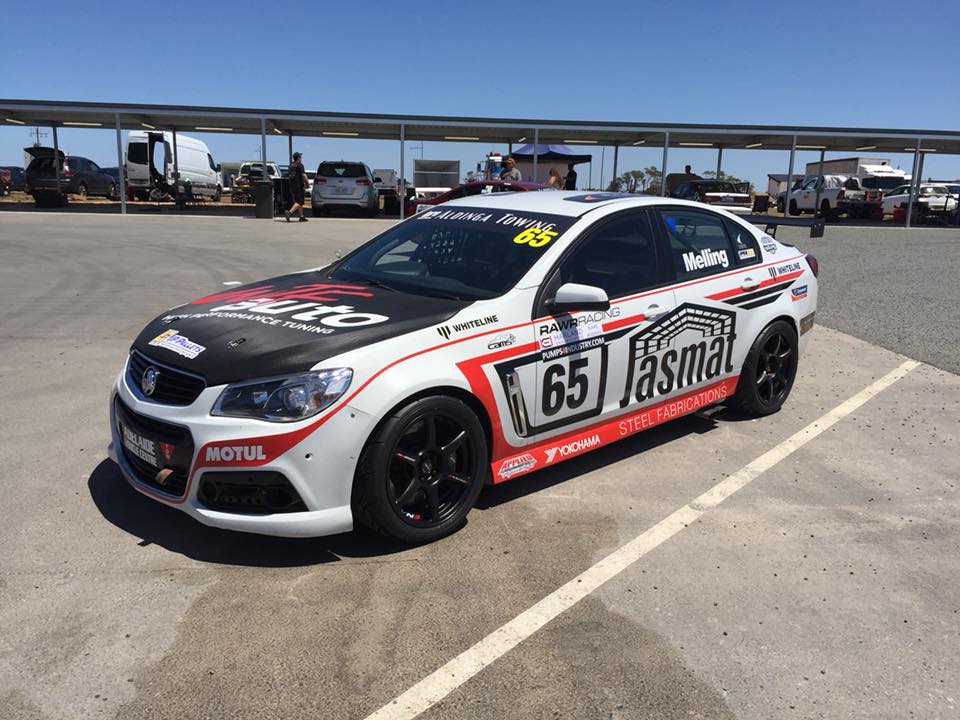 De-laminations apparently occurred on a number of other heavy powerful cars.

Garry Edwards (WA) U3L Medina Auto Services BMW, made an ill-advised suspension change for the repechage.  This slowed his lap times and deposited him from starting 3rd to finishing 8th.  He probably took a knife to a gunfight in his U3L BMW, but he had a grin bigger than Africa on his face. 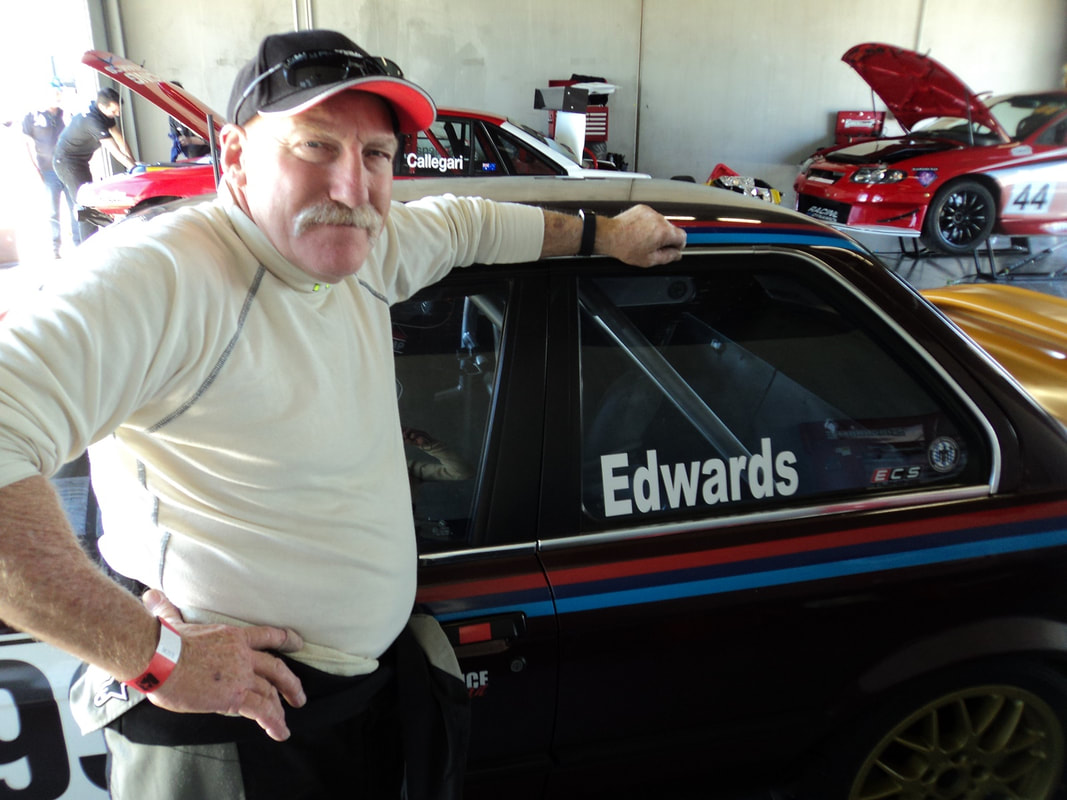 What a race!!  Favourite Ray Hislop (TAS) in a Falcon, started a little further back than one might have expected.  This was due to a puncture in one of the heats that denied him vital points. Challengers were determined not to let Hislop have his 3rd consecutive Nationals Title easily.  The serious challengers from WA included Matt Cherry (Monaro), John Callegari (Commodore). ​
Other serious contenders were Scott Cook (SA) in a Silvia and Adam Poole (SA) in another Monaro.

Adam Poole (SA) got ahead from the start followed by Matt Cherry (WA) and John Callegari (WA).  The sensation was Hislop, who rose to 5th at the end of Lap 1, 2nd on Lap 2.  Then in an unseen incident, he dropped to 6th and had to do it all again.

I mention John, as he had a minor issue with lapped traffic and lost the final podium spot by a mere 1/100 second after 60Km of racing.

Reuben Romkes (Monaro) came home in 18th Place .  I suspect he (as a very young driver) will have learned a lot from this experience.

It really was impressive to watch. What was max velocity prior to braking for T1? Looked fast coming past Hotel with what? another 500m to go? Sharky hasn’t had a look at data yet believes 265-270kph.

To me, the greatest victory was our camaraderie, followed closely by WA State of Origin victory.  But we are not competitive are we?  LOL.